SKU:
FR013
Availability:
Sorry, all units have been sold.

Over 350 hand-crafted parts.
Each individually designed, cast or fabricated part is hand-assembled using tweezers, glue-filled syringes, and a steady hand. Materials are chosen to replicate each feature accurately and include stainless steel, high-def resin, brass, wire, rubber and other composites.

A unique treasure for the Silver City.
As with most firetrucks, Meriden's Engine 3 is fully customized for the job...and each distinct feature is showcased on the scale model. From the stenciled lettering on the safety cones, to the uniquely painted fittings and graphics, the replica is true to the original.

Museum grade precision.
Meriden's Engine 3 replica is the fruit of an 18-month focus on the details. The joy is in the journey...and countless hours of design, proofing, and improvements make this replica museum grade.

Production limited to 150 units.
MFD Engine 3 is our first Seagrave Marauder II release and quite exclusive. Fire Replicas are designed with the elite collector in mind, and manufactured in limited quantities to enhance future value. 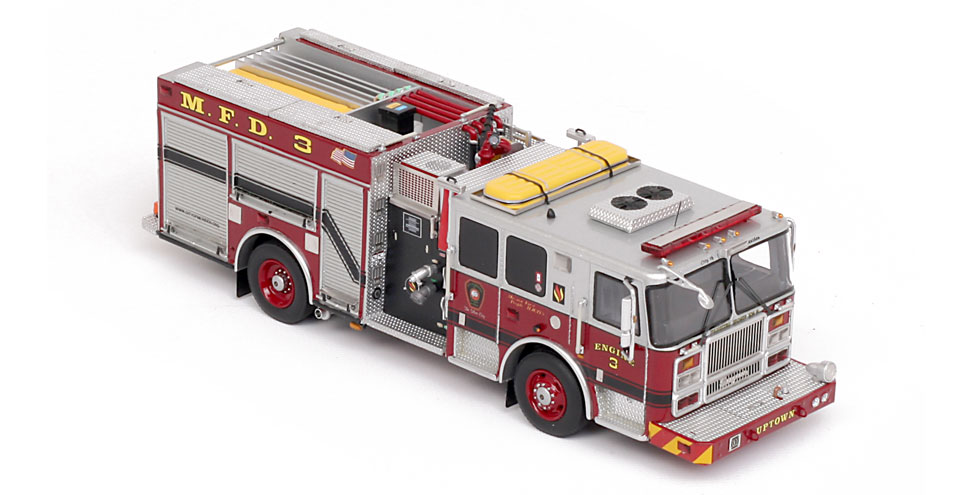 About the Scale Model

This Meriden Fire Department Engine 3 Seagrave Marauder II Pumper scale model is a museum grade replica. Like all Fire Replicas models, every detail is modeled to perfection and with razor sharp precision. The replica features the specific department configuration and graphics, leaving no detail overlooked. The display case is custom manufactured with high quality acrylic and resin. The stainless steel etched plate features the department and truck name, and department seal. This replica is a treasure to be displayed and admired and is in no way a toy.

About the Community, Department, and Truck

The City of Meriden was founded in 1806 and is located in the center of Connecticut, half an hour to the south of Hartford and half an hour to the north of New Haven. Located in New Haven County, Meriden has a land area of 23.79 square miles, a water area of .36 square miles and a population of nearly 61,000 residents. Meriden became known as “The Silver City” in the early 1900s as more silver was manufactured here than in any other community in the United States. The International Silver Company was the largest manufacturer, with several factories operating in Meriden until it closed its doors in the early 1990s. Because of the city’s substantial war-time manufacturing efforts, Meriden was named “The Nation’s Ideal War Community” in 1944. Like many manufacturing communities in the Northeast, Meriden has seen its traditional industries leave in favor of new businesses such as technology, pharmaceuticals, and retail establishments.

Meriden is surrounded by hills and traversed by Interstates 91, 691 and Route 15, also known as the Wilbur Cross and Merritt Parkways. One of its best known landmarks is Castle Craig, a stone tower which was constructed in 1900 and proudly overlooks Hubbard Park and the City from high atop East Peak. Hubbard Park is itself a gem, and each year plays host to the Annual Daffodil Festival, an outdoor craft, music and food event which celebrates the over 600,000 daffodils that are planted in the park and bloom each spring.

The Silver City is protected by the career Meriden Fire Department and the volunteer South Meriden Fire Department. The Meriden Fire Department is commanded by Kenneth E. Morgan, who was named the 20th Chief of the Department in 2013. Chief Morgan came to Meriden after retiring as Deputy Chief of Operations for the Clark County (Nevada) Fire Department in 2011. Assisting Chief Morgan are Deputy Chief David Bowen, Assistant Chiefs Louis DiGennaro, Mark Finnegan, Robert Burdick, and Russell Donovan, and Training Division Chief Ryan Dunn. The department has 98 members and operates out of five fire stations, which house five engine companies and one truck company. Staffing is divided into four groups, with a minimum of 21 firefighters on duty at any time, and each company is assigned one captain and three lieutenants. Engines 1, 3, 4 and 5 respond with an officer and two firefighters, Engine 2 responds with an officer and three firefighters, and Truck 1 responds with an officer and three or four firefighters. The department is a first responder for medical emergencies and averages 10,000 runs per year, with approximately 60% being medical calls and 40% being fires and other non-medical emergency calls.

Engine Company 3 was established in 1869 as the Parker Hose Company and moved to its current station on Broad Street in 1889. At 125 years old, it is believed that this building is the oldest continuously operating station house in Connecticut. In 1996 the station underwent a major renovation which included the construction of an additional apparatus bay designed to house the larger engines of today, new living quarters for the crews of Engine 3, and the relocation of the Department’s Headquarters to the renovated existing part of the building. The original apparatus bays retain much of their original character, and hoof marks from when horse-drawn apparatus responded can still be seen on parts of the floor in the former horse stall area on the building. Engine 3 currently operates with a 2010 Seagrave Marauder II pumper with a 1250 GPM pump and 500 gallon water tank; this was the first apparatus to be painted in the City’s new silver over dark red paint scheme. Engine 3 covers an area known as Uptown Meriden, which includes the southwest corner of Meriden down to the Wallingford town line.

Since 2010, Meriden has played host to the Silver City Fire Fest. Now entering its sixth year, the Fire Fest is an annual event geared towards fire buffs, children, and anyone interested in emergency services and features model emergency vehicle displays, photography and video displays, vendors selling fire related books, magazines, clothing, models, helmets and other items, as well as an outdoor display of in-service and collector-owned emergency vehicles from around the area. The event is open to all branches of emergency services and is sponsored by the Connecticut Fire Photographers Association, Southern Connecticut Antique Fire Apparatus Collectors, and the Meriden Firefighters Benevolent Society.