SKU:
FR015
Availability:
Sorry, all units have been sold.

Over 510 hand-crafted parts.
Each individually designed, cast or fabricated part is hand-assembled using tweezers, glue-filled syringes, and a steady hand. Materials are chosen to replicate each feature accurately and include stainless steel, high-def resin, brass, wire, rubber and other composites.

Designed for the discerning.
On the replica complexity scale, Seagrave Aerialsopes are higher than most. Our goal with each release is to improve in every area...so that our customers will notice something new each time they view the model.

Museum grade precision.
Over 18 months of development has been invested in the Kentland Tower 33 Ladder replica. Countless hours of design, proofing, and improvements make this replica museum grade.

Extremely limited availability.
Production of Tower 33 is limited to 350 units. Fire Replicas are designed with the elite collector in mind, and manufactured in limited quantities to enhance future value. 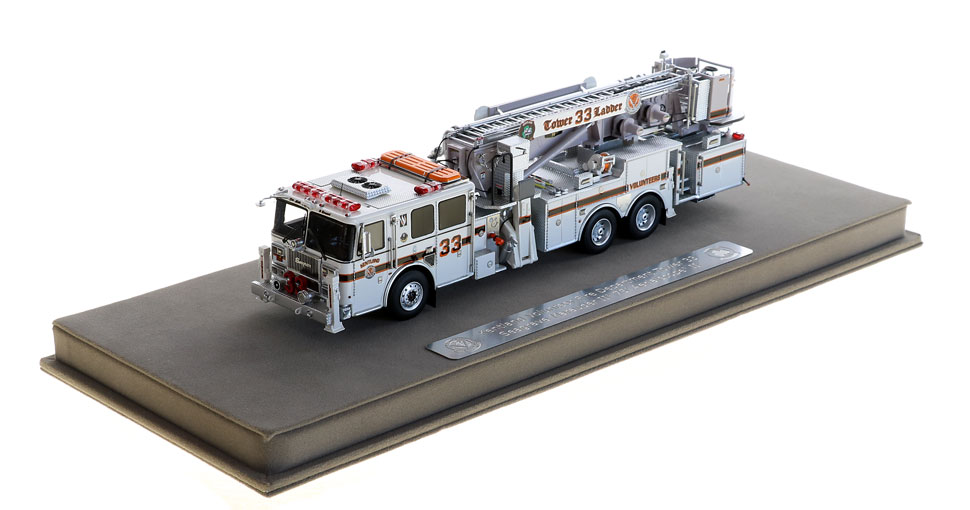 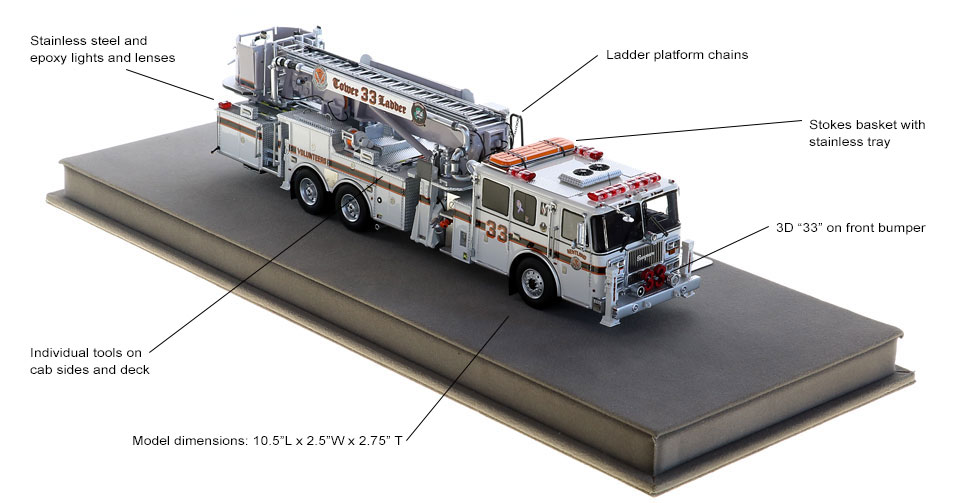 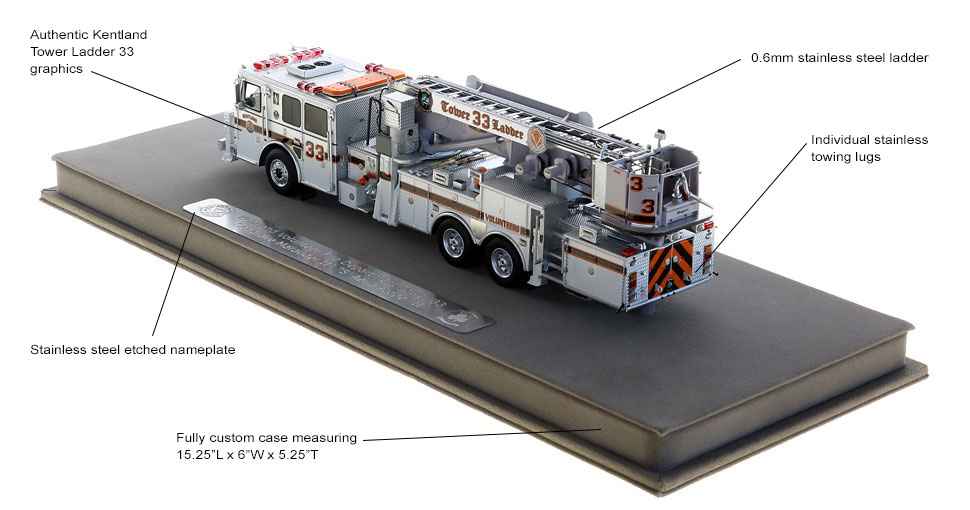 This Kentland Volunteer Fire Department Tower 33 scale model is a museum grade replica. Like all Fire Replicas models, every detail is modeled to perfection and with razor sharp precision. The replica features the specific department configuration and graphics, leaving no detail overlooked. The display case is custom manufactured with high quality acrylic and resin. The stainless steel etched plate features the department and truck name, and department seal. This replica is a treasure to be displayed and admired and is in no way a toy. 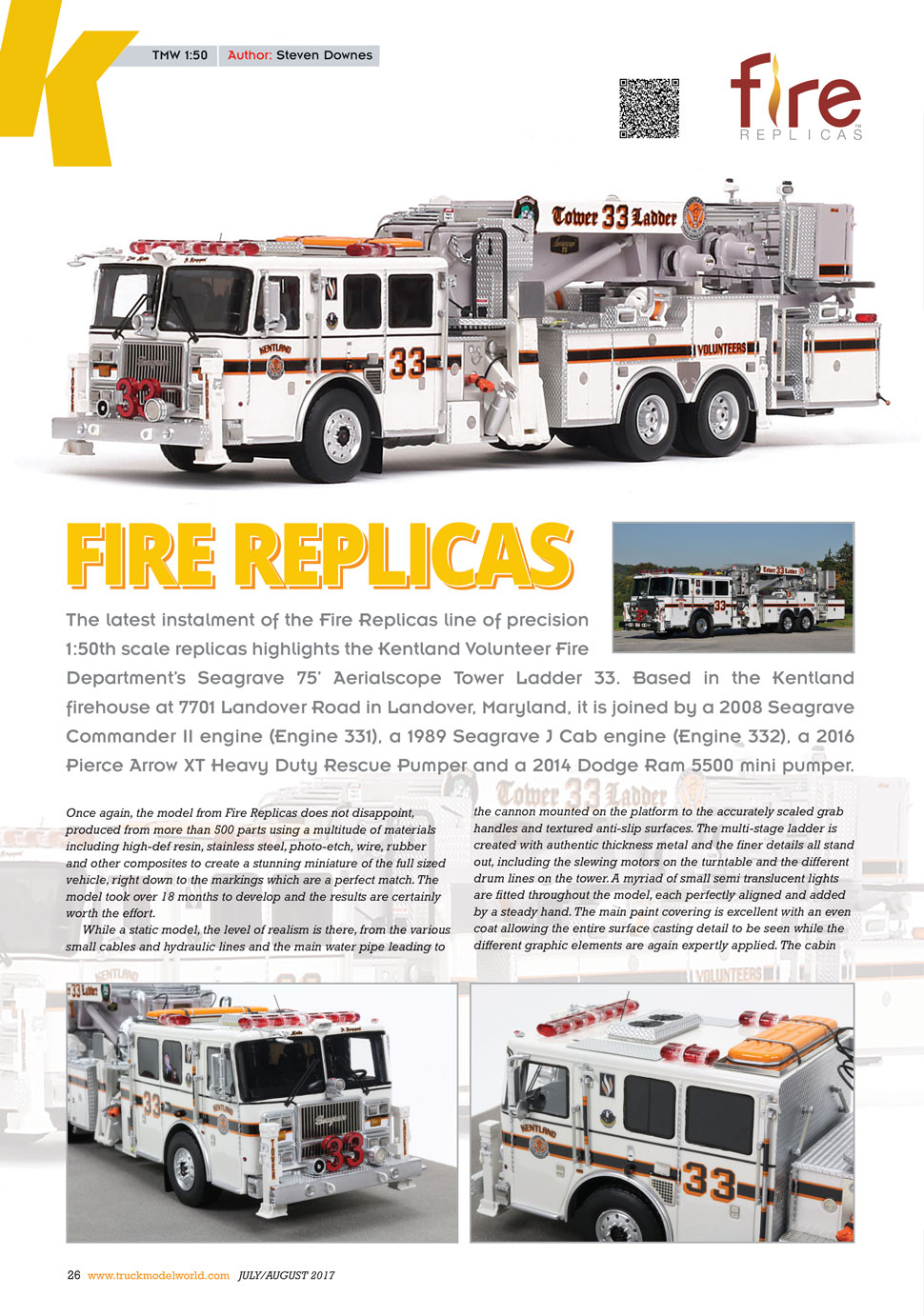 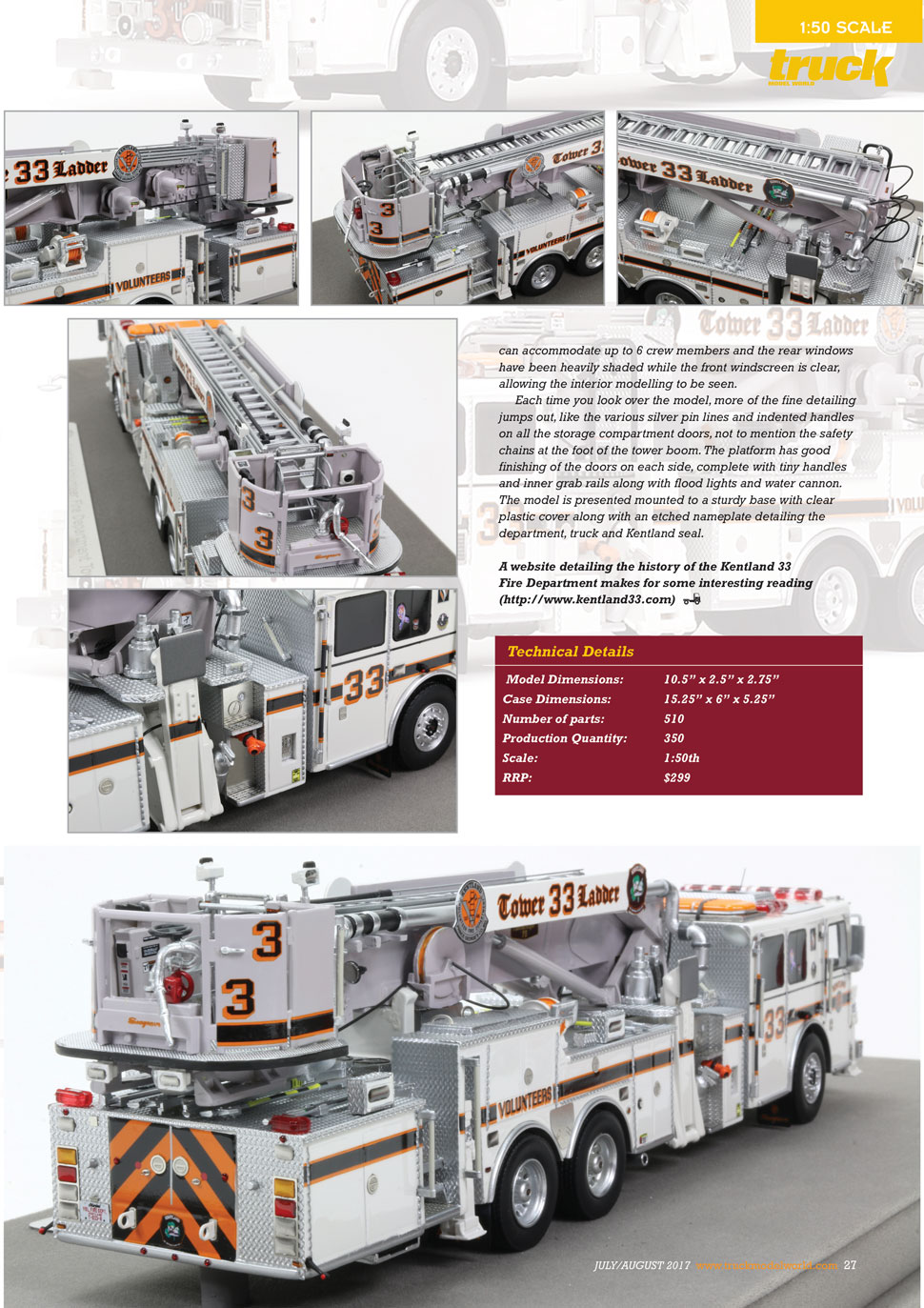 The KVFD provides a superior level of service through a unique membership. Our members manage a response burden unsurpassed by most volunteer departments, and provide a level of service equal to the most highly- resourced departments in the nation. The KVFD covers a large response area, with a first due area of 19 square miles, and a box alarm area of 52.2 square miles. We protect a variety of critical infrastructure resources in our primary response area, including FedEx Field, the 92,000 seat stadium of the Washington Redskins, the Fire/EMS Department headquarters, the Health Department headquarters, a US Secret Service office building, and the US Treasury Department’s main storage facility for the ink used to print US currency. The first due also has several demographic variables associated with increased fire and EMS demand, including a poverty rate over 25% and an unemployment rate over twice the national average. The needs of the response area place a significant burden upon the members of KVFD: the members of the all volunteer department responded to thousands of calls per year, including over 100 working fires. To provide unparalleled service to the community, the members of KVFD provide three services: a Class A engine, a Tower ladder, and a Rescue Engine equipped for fire suppression, technical rescue, and vehicular rescue/extrication operations. The KVFD is one of only two stations in Prince Georges County to provide all three services.

The rescue response area of the Kentland VFD includes 21.4 miles of highway, where high speeds and heavy traffic volume increase the potential for serious accidents that often leave the victims pinned in their vehicles. Three major interstate highways (US Rt. 50, Interstate 495/95, and Rt. 295, the Baltimore-Washington Pkwy) are a part of Rescue Engine 33’s response area of about 45 square miles. KVFD is located adjacent to Washington, DC in Prince George’s County, one of the fastest growing Maryland counties, with a 2010 population of 865,271. The Washington Post deemed the section of I-495/95 in our area the “Deadliest Stretch” of highway in the state. In 2013, the KVFD responded to 5280 calls, a number that surpasses many fire departments, and 943 of those calls were for motor vehicle accidents.

The Kentland Volunteer Fire Department was founded in February of 1951 when 10 neighbors met around Bob Baeschlin’s kitchen table and decided there wasn’t adequate fire protection in their neighborhood. The men put up their own money, took out loans, and bought a fire truck that sat in front of Bob's house for the next two years. In 1953, with more of their own money, loans, second mortgages, and expertise from the West Brothers Brick Company, the members built the first station by hand, instilling a sense of pride in the department that still shines through today. In the early 1950's, firehouse 33 was totaling 230 runs a year; by the mid 1960's, that number jumped into the 900's. With the increase in calls, the Department started its “Live-In” tradition by allowing 4 firemen to live at the firehouse rent-free. The Department also paid a driver to sleep in at night and hired a mechanic to service the rigs and drive them during the day, eventually leading to 3 paid men during the day.

In 1970, Prince George’s County switched to a charter form of government and the paid men at 33 were absorbed as County workers. Kentland was staffed by 4 career firefighters from 7 AM to 3 PM, and exclusively by volunteers on nights and weekends. In 1995 the last Landover Farm, continuously operated by the Wilson Family since 1752, was developed into Jack Kent Cooke Stadium, home of the Washington Redskins. Today the 91,000 seat stadium now called FedEx Field occupies the South Eastern 288 acres of the First Due. Woody Wilson is currently an active life member of the Department. On May 25, 1995, the career staff was removed by the County Fire Department and Kentland Volunteers have staffed Firehouse 33 for the last 20 years, averaging 110 fires and 4800 runs per year, never failing to respond and never responding understaffed. Presently, there are 75 active volunteers, three Chief Officers, four Captains, four Lieutenants, and four Sergeants; 23 of these men are live-in members.

In the late 1980’s, the membership saw the need to supplement the station’s Engine Company with an equally formidable Truck Company. The original Tower 33 was bought in 1987 from an auction in NYC, where it had served with distinction during the “War Years” as FDNY Tower 17 in the South Bronx. Where the previous owners saw a worn out fire truck at the end of its serviceable life, the visionary leaders of the KVFD saw a diamond in the rough; after purchasing the unit, they drove it to Maryland to begin restoring it, stopping several times along the way to make field repairs and replace tires, as one dry rotted wheel failed after another. The members undertook the monumental task repairing and repainting the weary rig in-house, and while the CF Mack 75' Baker had seen its fair share of fires before coming to Kentland, it only got a short break before going right back to work. The first run she took from Landover road was a working fire, and the paint and striping hadn’t even been completed yet. That year "Truck 33" totaled 410 working fires.

In 1994, Captain Mick McKenzie led the refurbishment of Truck 33, taking the original boom, basket, hydraulic components and placing them onto a FWD cab and chassis, breathing new life into the rig. Tower 33 would go on to provide over 15 more years of service to the KVFD, responding to thousands of working fires and dozens of multiple alarms. Because of its proximity to the District of Columbia, Tower 33 also operated at the Pentagon on September 11, 2001 as part of a multi-alarm firefighting and rescue effort at the headquarters of the Department of Defense. On August 13, 2010, “Sally”, as the rig was affectionately known, was put out to pasture on Long Island, where she was again refurbished so that she can quietly serve out the rest of her life as Tower 7-6-11 of the East Quoge Fire Department. Thanks in part to a FEMA Assistance to Firefighters Grant, Kentland placed its 14th Seagrave, a 2011 Marauder II 75’ Aerialscope Tower Ladder, in service on October 18, 2011 at 17:00 hrs. The first working fire came just 19 hours after placing the Tower in Service, and on the way back from the run the members decided to give the new Tower the nickname "Lucille".