SKU:
FR050-39
Availability:
Sorry, all units have been sold. 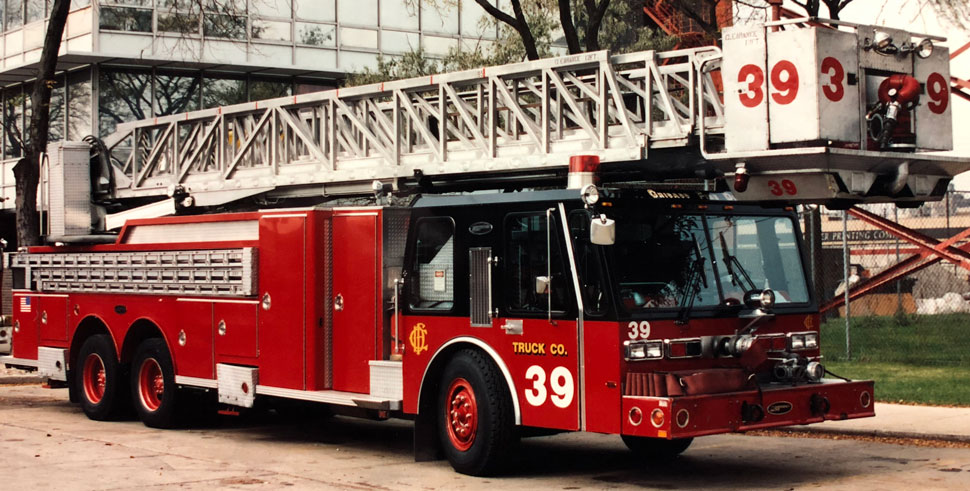 About Tower Ladder 39 by Joe O'Brien

Tower ladder 39’s 1985 E-One Hurricane Tower Ladder was the first Tower Ladder put in service by the Chicago Fire Department. This truck would pair nicely with your Fire Replicas Engine 123 or the 2017 E-One Tower Ladder 39.

Starting in 1927, Chicago was expanding by annexing more smaller towns. The fire department also was growing. From 1927 until 1929, 14 new Truck Companies were established. The first new truck company was Hook and Ladder 39. Truck 39 was established in 1927 and moved into a brand new firehouse on Laflin, just south of Madison, with a straight frame trailer pulled by a White tractor. Truck 39’s most notable rig while at this station was the 144’ Mack Magirus, a six section aerial that also had ground ladders attached to the side of the aerial.

In 1969, as the city was still making cuts, Truck 39 was taken out of service and Engine 103 moved into the the firehouse. In 1974 a new firehouse was built on 51st Street east off Western Ave for Engine 123. The new 3-bay station would also see Truck 39 re-organized and put in service with Engine 123. The first rig would go in service as Truck 39 using Truck 21’s old 1970 Ward/Grove. In 1981 the station had an Engine, Truck, Snorkel and an Ambulance.

In 1985 the first E-One Hurricane was placed in service as Truck 39. This was about a year after Snorkel 5 was taken out of service. In 1987, Truck 39 became Tower Ladder 39. The E-one ran front line as Tower 39 for 11 years. In 1996, the same truck then went in service as the newly- created Tower Ladder 54, replacing a regular rear mount Truck 54. Tower 54 would run the same E-One Hurricane front line until 2005. After 20 years as a front line Tower Ladder the rig went to the spare pool, and I believe it is still a spare today. This rig has been running for 34 years.

This Chicago Fire Department Tower Ladder 39 scale model is a museum grade replica of an E-One Hurricane 95' Aerial Platform. Like all Fire Replicas models, every detail is modeled to perfection and with razor sharp precision. The replica features the specific department configuration and graphics, leaving no detail overlooked. The display case is custom manufactured with high quality acrylic and resin. The stainless steel etched plate features the department and truck name, and department seal. This replica is a treasure to be displayed and admired and is in no way a toy.