Engine 28 is hand-crafted and very limited.
Engine 28 features true-to-scale parts that are individually designed, cast or fabricated, painted, decorated and assembled over the course of 18 months. Production has been limited to an elite 75 units. 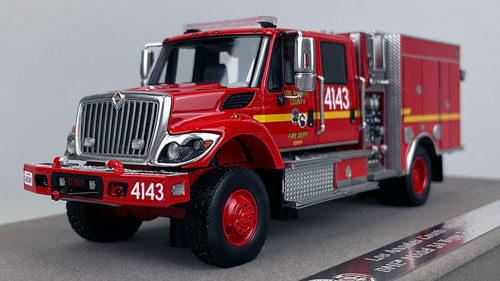 In 1875 a brand new two story brick firehouse was built with 2 bays at 2867 South Loomis on the near south side of Chicago. Both Engine 28 and Truck 8 were organized in this building. Engine 28 was motorized with a Ahrens Fox in 1919, and received a brand new Mack in 1949. In 1917 Truck 8 received its first motorized Truck. In 1954 Truck 8 received a brand new FWD tiller which was produced and has sold out by Fire Replicas. This was a perfect pair for the stablemate collections. In 1963 the 88 year old station was torn down and a brand new 4-bay station was built on the same site. Both the 1949 Mack and the 1954 FWD moved into the new station in 1963, and would remain in front line service until 1968 before becoming spares. If you were lucky enough to get the Fire Replicas 1954 FWD Hook and Ladder 8 you will not want to pass up on its stablemate Engine 28. Today Engine 28 is running the E-One that is also available at Fire Replicas. (Courtesy of Joe O'Brien)

This Chicago Fire Department 1949 Mack® L Coupe Cab Engine 28 scale model is a museum grade replica. Like all Fire Replicas models, every detail is modeled to perfection and with razor sharp precision. The replica features the specific department configuration and graphics, leaving no detail overlooked. The display case is custom manufactured with high quality acrylic and resin. The stainless steel etched plate features the department and truck name, and department seal. This replica is a treasure to be displayed and admired and is in no way a toy.