The next addition to your vintage Chicago fire truck collection.
This 1:50 scale model of Chicago Fire Department's 1948 Mack L Sedan Cab Engine is a museum grade masterpiece, and a worthy addition to elite Chicago collections. Hand-crafted and limited in production, these replicas will not be available long.

Hand-crafted using intricately detailed parts.
Chicago's 1948 Mack L Sedan Cab Engines feature true-to-scale parts that are individually designed, cast or fabricated, painted, decorated and assembled over the course of 18 months. Each model is designed to be authentic and precise.

Only 75 units available of 4 Engine Companies
Engine Companies 5, 17, 34 and 42 are limited to an elite 75 units each. Fire Replicas manufactures true collectibles in limited quantities for enhanced long-term value. Once fully sold, no additional units will be produced.

Each engine company model is unique...see below for a side by side view.
Each CFD Engine has unique accessories, graphics and paint. Minor differences include cab roof lighting, running board filter can, hub/lug nut painting and more. In addition, each model has its own Engine Co. No. designation on the cab doors. 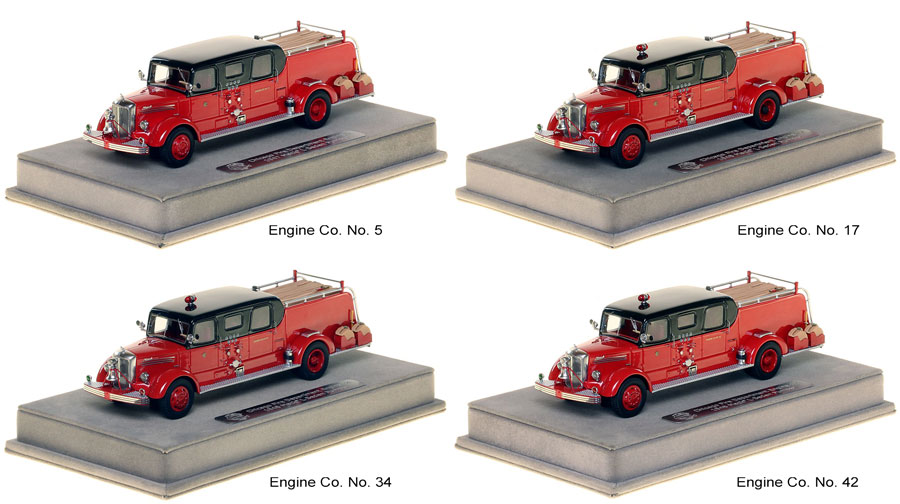 Engine 5 - In 1859  the Volunteer Engine 5 ‘Excelsior’ was placed out of service. In 1860 the paid Chicago Fire Department, Engine 5 ‘U.P. Harris’ was organized. During the transition period from Volunteer to paid it was normal to have the the steamers and rigs with names. U.P. Harris was the Chief Engineer of the Town of Chicago Volunteer fire department which was organized in 1835. As the city grew, the volunteer department would change to a paid department in 1858.

Engine 5 received its new Silsby steamer in 1868 “Chicago”. In 1871 Engine 5 moved in to a new 2 bay firehouse at 326 S Jefferson with Truck 2 ‘Protector’. Engine 5 received its first motorized rig in 1912 which was a Nott/Steamer at the same time Wagon 12 got a 1912 Harder. In 1923 Water Tower 1 was organized in this firehouse (Fire Replicas 1923 Water Tower). The firehouse location was west of the south branch of the Chicago river and spared by the Great Chicago Fire of 1871. In 1928 a company wanted to expand its building on the grounds of where Engine 5’s firehouse was. The city sold the building to the company and exchanged land with the company a block to the west on Desplanes. In 1928 the new 3 bay firehouse opened with Engine 5, Water Tower 1(the 1928 Fire Replicas model) and High Pressure 1. This is still an active firehouse.

Engine 5’s third motorized rig at this station was the 1948 Mack Sedan which was in service until 1964. Fire Replicas has reproduced engine 5’s 48 Mack L Sedan. This could look display well with the 1928 Seagrave Water Tower 1 or a 1954 FWD tiller.

Engine 17 - In 1852  the Volunteer Engine 6 ‘Protector’ was placed in service at a new Firehouse at 558 W. Lake, In 1859 CFD Engine 4 ‘Island Queen' moved into this fire house. The history of the 2 story firehouse gets confusing as some information says, a new two story station was built on the same site maybe in 1864, however CFD still had records saying the house built in 1852. Oddly enough some records say that Engine 4 ‘Island Queen’ moved to a new station in 1865.

In February of 1866 Engine 12 was organized at this firehouse. In 1870 Engine 17 was organized at this firehouse and Engine 12 moved ten blocks west to 1641 W. Lake Street. One thing for sure is the station did not have the ‘el' tracks and trains outside the bay doors until the 1890’s, which is how many people related the firehouses on Lake St. Engine 17 went out of service in 1968. The station was used by Civil Defense, and other items were stored here until the roof collapsed from the heavy snows of 1979.The building was tore down later in the year of 1979.

Engine 17 first motorized truck was a 1922 Seagrave. In 1948 they received a brand new Mack Sedan which was in service until 1965. Fire Replicas has reproduced engine 17’s 1948 Mack L Sedan, another of the historical classics that you may want to add to your collection. This could look good next to Fire Replicas Engine 17 1970/90 Ward E-One of course for the hard core CFD fan you know Engine 17 went out of service prior to that.

Engine 34 - Near the end of 1884, a new 3-story Fire house was near completion at 114 N. Aberdeen in Chicago located just a few blocks from the Fulton Market. After the Great Chicago Fire of 1871 waves of immigrants were settling in this area as the market and factories had job opportunities.  On January 1 1885 Engine 34 was organized in this new firehouse with a steamer and hose wagon. In 1906 a one story annex was built next door and used for storage. In 1912 the storage building was cleared out to prepare for Squad 2. Squad 2 was organized in 1913 and received a motorized Harder truck.

In 1964 as the city was had been going trough several changes, Engine 34’s house would be closed. Engine 34 moved in with Hook & Ladder 41 (Fire Replicas 1954 FWD) while Squad 2 would move in with Engine 5. The firehouse still stands today, a Pharmacy exists on the old bay floor.
Engine 34 received its first motorized engine in 1919 a brand new Seagrave. The most notable engine that 34’s ran was the 1948 Mack Sedan which was in service until 1964. The 1948 Mack L Sedan Cab Engine 34 would look great with the 1954 FWD Tiller.

Engine 42 - From 1885 to 1888 the City of Chicago was starting a boom period as housing, industry as well the population were growing. This also meant the Fire Department would need to grow. The firehouses built during this time saw a mixture of 2-story and 3-story building as well as single bay and double bays. The 3-story firehouses were considered “inner city”, higher population of people and property required more manpower, so the need for room for personal meant a third floor. These stations were also built in neighborhoods and were the corner stones of the area. The double bay stations were built with a Ladder and Engine to serve the area while the single bays would have normally one company (Engine and Hose wagons were considered one company as would a ladder).

This Chicago Fire Department 1948 Mack® L Sedan Cab Engine scale model is a museum grade replica. Like all Fire Replicas models, every detail is modeled to perfection and with razor sharp precision. The replica features the specific department configuration and graphics, leaving no detail overlooked. The display case is custom manufactured with high quality acrylic and resin. The stainless steel etched plate features the department and truck name, and department seal. This replica is a treasure to be displayed and admired and is in no way a toy.